I am still trying to understand how somebody like Ahmed Mohamed in Irving, Texas, would have the police called on him BY HIS OWN SCHOOL TEACHERS AND ADMINISTRATORS for bringing in a homemade clock science project.

Here is the infamous Ahmed arrest photo that got shared on Twitter and sparked national outrage: 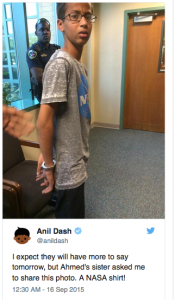 I am outraged and disgusted too.  Suppose his home-made clock did look a little suspicious.  But even this is a stretch…where is the common sense to ask the question, “Where did this come from?”  “Who brought it here?”

The fact that nobody asked those questions AND THEN HAD A RATIONAL, HONEST CONVERSATION with Ahmed shows the dramatic failure in this school.

Ahmed has quickly received tons of support and encouragement from around the country, from Obama, Mark Zuckerberg, and many other people.  That’s fantastic.

I think the ignorant and impulsive teacher and principal who failed to grasp the context of the situation should be ashamed of themselves.  Beyond that, what should be next for them?  I am struggling to figure that out.  They probably realize the big mistake that they made.  So they don’t deserve to have their life and career ruined (probably, but I’m still debating that myself).

The fact that Ahmed Mohamed was a STUDENT IN THEIR OWN SCHOOL that is supposed to be encouraging initiative, creativity, and STEM skills just makes my blood boil.  The school even has a Maker Club!!!

What do you think we should do about the Ahmed arrest in Texas for bringing a homemade clock to school?

What should we learn from this?  What can we learn?

One way to turn this into an opportunity is clear.  Ahmed picked an awesome shirt to wear to school that day.  Ahmed’s NASA shirt made this a fantastic publicity event to promote rocket science!  It also is a baffling and outrageous illustration of how hard it is for many kids to pursue their passion and do great things in STEM fields.

We need to do much better, and fast.

The Dallas News website has one of the best stories to summarize this fiasco.

Join the conversation with a comment below!  And please share this post with others if you agree that we need to do a much better job encouraging kids to be scientists, engineers, and inventors!

3 thoughts on “The Ahmed clock arrest and rocket science”