It’s time for another Fun Friday post.  Let’s talk about those motivational posters and billboards…you know what I mean.  I do actually believe that positive motivation (or “brain food” as I call it) is essential to be happy and successful.  For us as individuals and as organizations.

But sometimes (too often) these posters for company values are just platitudes or used as a cosmetic band-aid to try and force something that just isn’t backed up by action and leadership.

What gets me the most frustrated and annoyed is when people say one thing and then do the exact opposite.  Or think they are shining examples of virtue when they are far from it.

Just last night my local news station ran a story about the new law in San Antonio (in effect on January 1, 2015) that requires  hands-free phones in cars and no texting.  They not-so-secretly drove besides the city council members who voted for this law–using their phones to text and talk while driving!!  For once it was local news doing some genuine and valuable investigative reporting!  (I couldn’t find a link yet but if I get it later I’ll add it here.)

I think it’s been many years since the “Successories” brand and product line was at its peak.  But one hilarious and cynical take-off on this was Despair, Inc.  Their website is www.despair.com.  They use a similar style and product line but have a much more cynical (some say realistic) take on things.

You can probably spend a lot of time having fun browsing through their products.  I have to set a time limit when I go there.

One night when I couldn’t sleep, I had some fun making a set of these anti-successory posters for myself.  They happened to be on a theme that I was familiar with…(cough cough).

Humor can be an effective way to point out inconsistencies and difficult issues.  It can also be an effective way to explain how NOT to act.  And I’ve found humor is also a very effective and helpful way to have a long career in the aerospace industry.  So enjoy this one poster for today.  I may share another later.  There is more where this one came from! 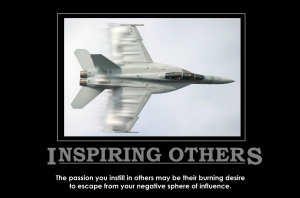