There is another rocket science blog out there on the leading edge of cyberspace…and it’s transmitting the progress of the Dawn spacecraft which recently entered into orbit around Ceres! 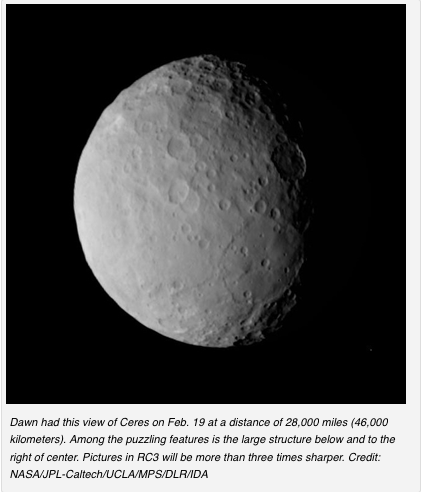 Dawn took this picture of Ceres on Feb. 19 at a distance of 28,000 miles (46,000 kilometers). Despite extensive speculation (see, for example, here), the nature of the bright spots is not yet known, but we can look forward to more detailed pictures and other data that will elucidate this mystery. Credit: NASA/JPL-Caltech/UCLA/MPS/DLR/IDA – See more at: http://dawnblog.jpl.nasa.gov/#sthash.NFVgGimE.dpuf

Marc Rayman, the Dawn chief engineer and mission director at JPL, is the author of the blog.

You don’t have to wait until you go to college or you work at NASA to learn a lot of awesome things about space travel, orbital mechanics, spacecraft design, and astronomy.  Just read and subscribe to the Dawn blog!

If you want to hear more from Marc Rayman, check out the January 26th, 2015 episode of The Space Show with Dr. David Livingston. Marc was the special guest for the entire program, and he gave an expert’s insight into the mission (but still in ways for almost anyone to understand, assuming you can listen in English).

Thanks to our modern internet technologies such as blogs and podcasts, anyone can follow Tip #3 (Associate with people in the field) and Tip #7 (Use free and informal education resources).  Read more about those in the book How To Be a Rocket Scientist and learn 8 other powerful tips to help you launch (or boost!) your own career in aerospace.

By the way, do you remember what you were doing on September 27, 2007?  (Or anything about your life from that month?!)  That’s the date that the Dawn spacecraft was launched from Earth!  This is either a blessing or a curse with working in rocket science (or both)–your projects can have R E A L L Y L O N G time frames…if you have determination, vision, and patience you can be sure there will be exciting projects for many decades (even centuries) ahead. 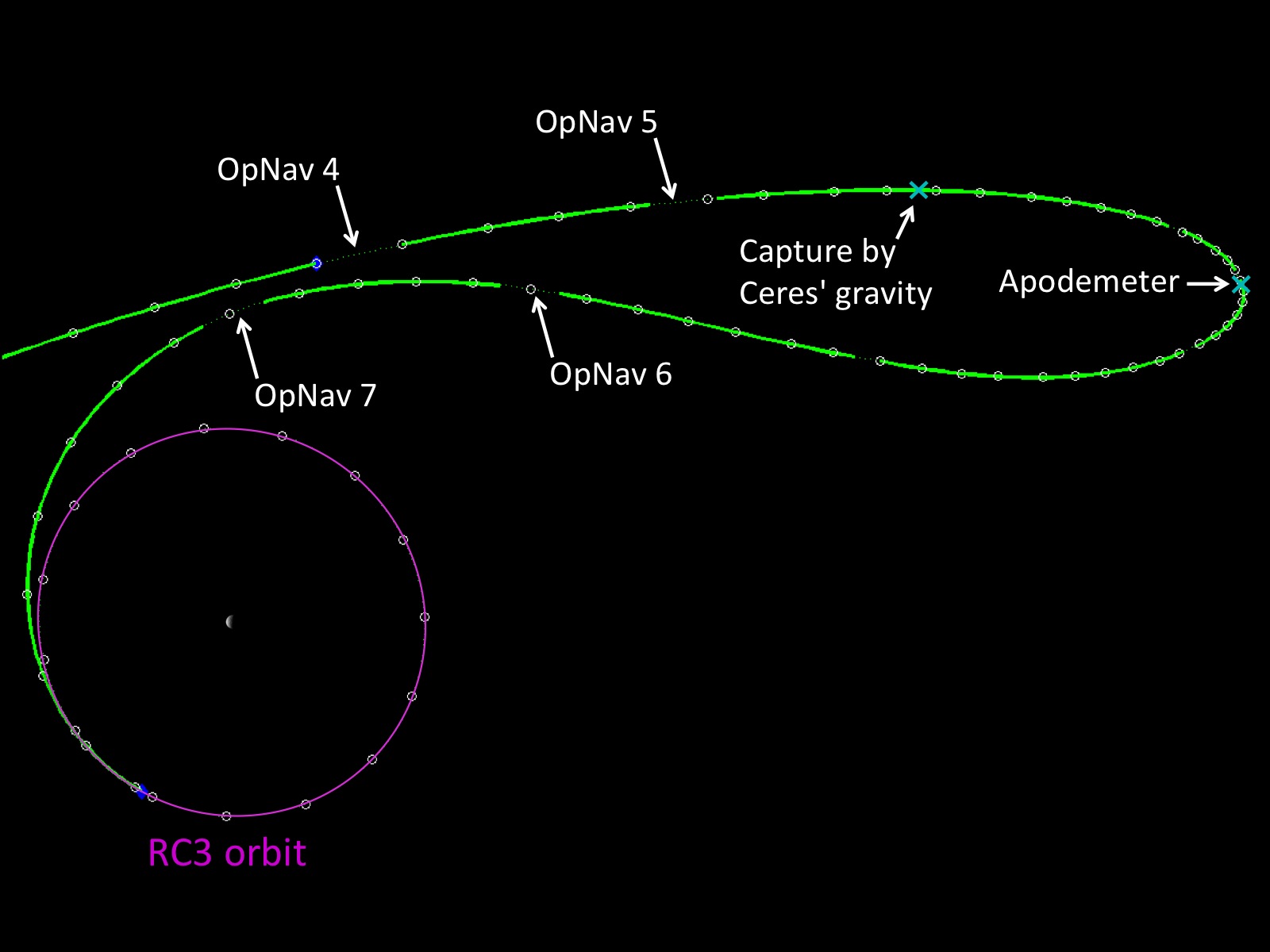 Dawn’s final swoop down to RC3 orbit. The sun is off the figure far to the left, and Ceres’ north pole points up. The farther Dawn is to the right side of Ceres here, the smaller a crescent it sees, because the illumination is from the left. The white circles are at one-day intervals. The trajectory is solid where Dawn is thrusting with its ion engine, which is most of the time. The labels show four optical navigation sessions, where it pauses to turn, point at Ceres, conduct the indicated observation, turn to point its main antenna to Earth, transmit its findings, turn back to the orientation needed for thrusting, and then restart the ion engine. Dawn was captured into orbit on March 6. Note the periods on the right side of the figure between OpNav 5 (on March 1) and OpNav 6 (on April 10) when Dawn pauses thrusting for telecommunications and radio navigation but does not take pictures because it would have to point its instruments too close to the sun. Apodemeter is the Dawn team’s word for the highest altitude in orbit, in analogy with the more common term apogee, which applies for Earth orbits. (Demeter is the Greek counterpart of the Roman goddess Ceres.) Dawn was at its apodemeter of 46,800 miles (75,400 kilometers) on March 18. For more on Dawn’s approach trajectory, see the overall description and figures from other perspectives in November (including the motion into and out of this flat depiction), further details (including the OpNavs) in February and an animation in March. Credit: NASA/JPL – See more at: http://dawnblog.jpl.nasa.gov/#sthash.NFVgGimE.dpuf