This is the last post to share from my family trip to NASA Johnson Space Center in Houston, Texas.  In Part 1 here I had pictures and account of the main Space Center building, including the secret entrance to the best room in the building!  In Part 2 here I had pictures and an account of the Mission Control Center, complete with a sunset from the ISS!

The third major destination and experience was to the Saturn V (five) building.  This is when awesome is no exaggeration!  The Saturn V is the largest rocket ever built and flown by humans (so far).  There were 13 of them built and launched for the Apollo moon missions and the Skylab space station.  When we eventually go to Mars we will need rocket scientists and engineers to design and build something bigger.

The only display with all three stages of the Saturn V that were built for the intention of flying (but never did) is at The Space Center at NASA Johnson.  The other Saturn V displays and much more info on the Saturn V is available at the wikipedia site here.

The first thing you see is the building to protect the rocket: 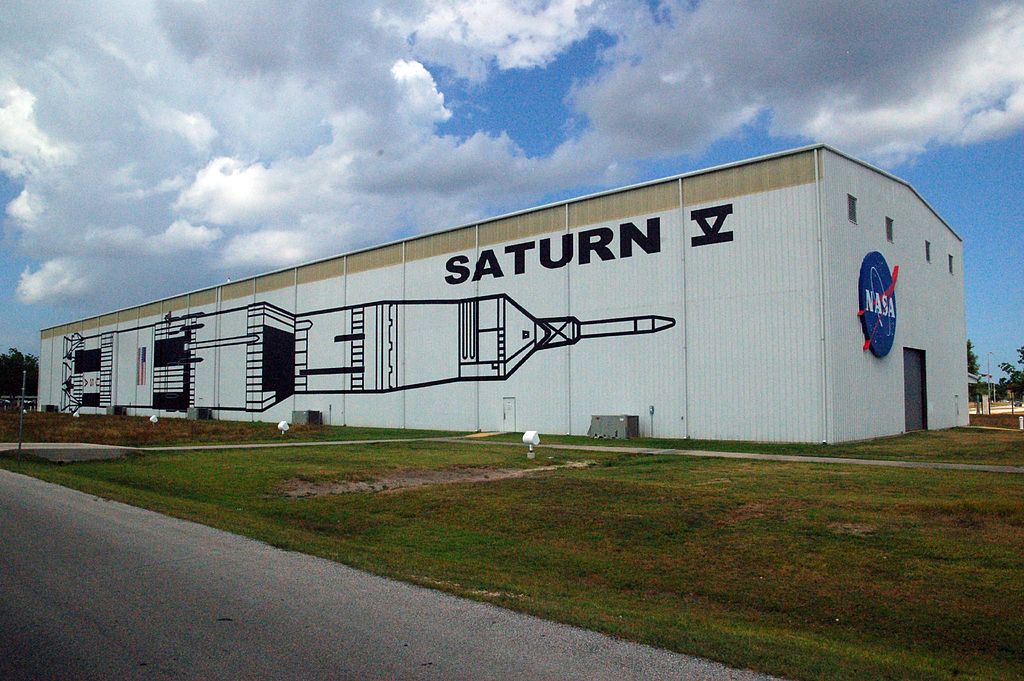 When you enter the door, you are at the “business end” of the first stage–as far as rocket scientists are concerned: 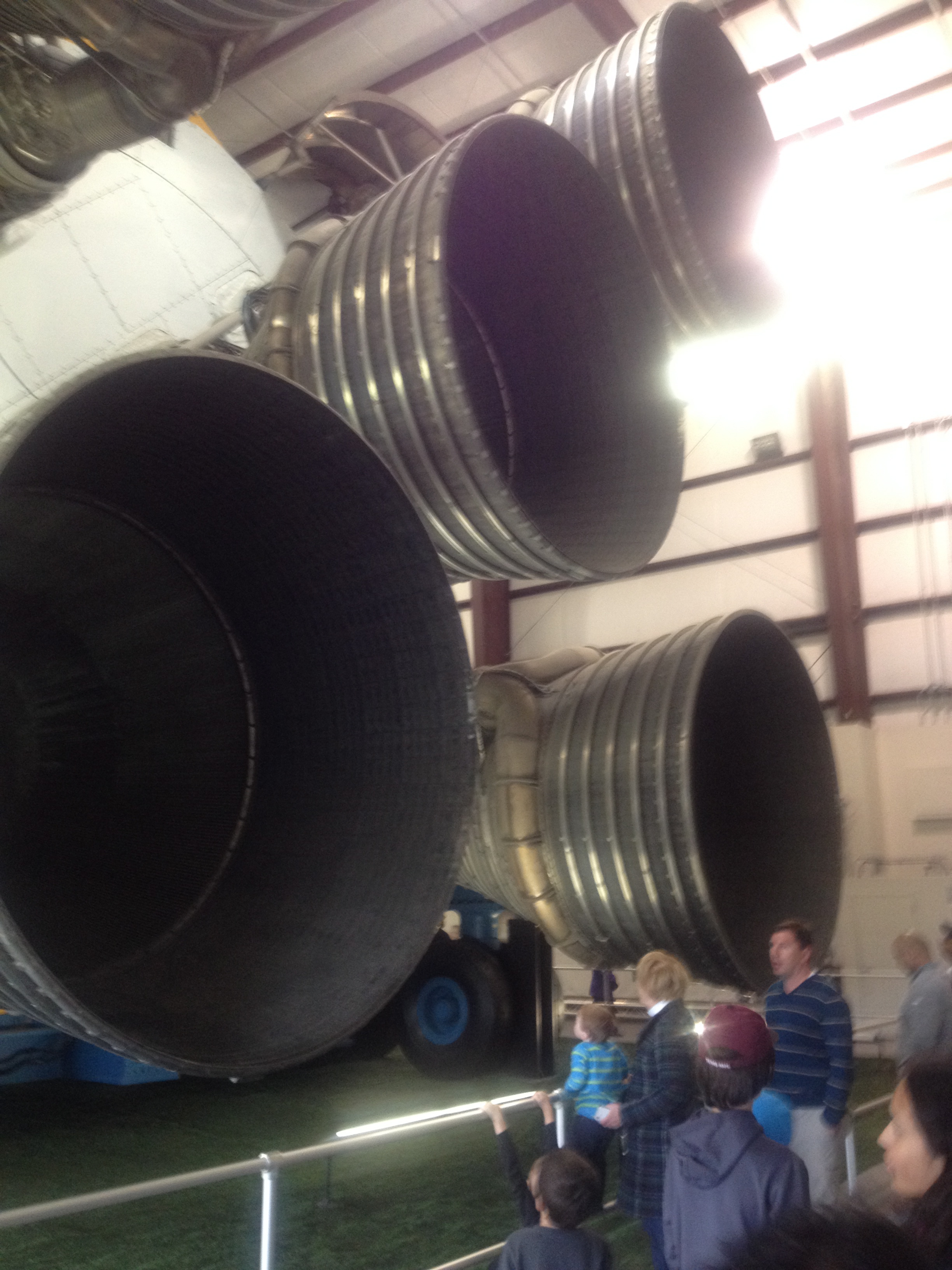 There are economy apartments in Manhattan with less cubic space than in one of those engine nozzles!

Here is another picture at the first stage engines with me and my family: 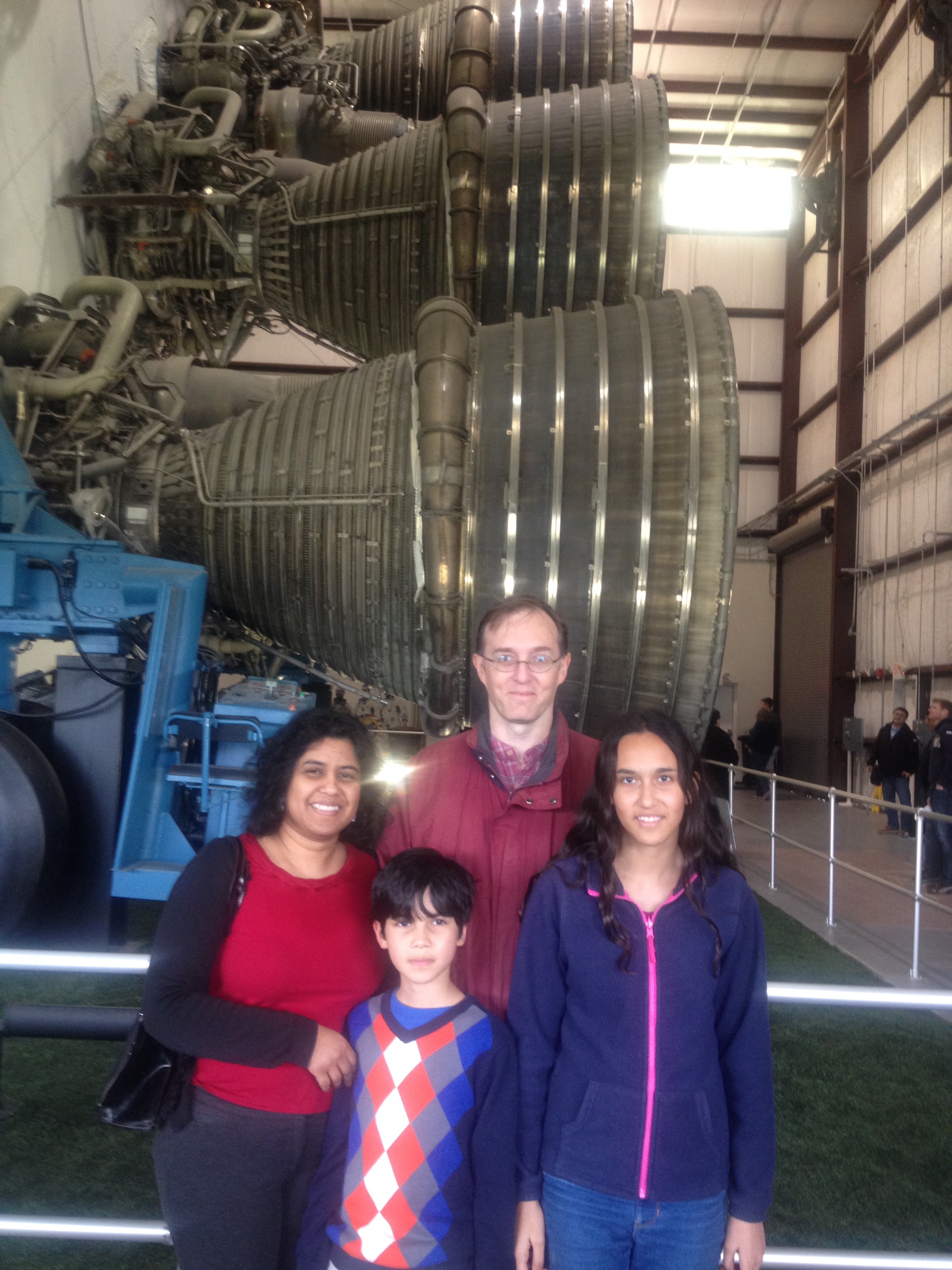 Let’s make it clear up front, none of these pictures are going to do this justice.  The scale of this rocket is incredible!  But I’ll give you a few more pictures anyway.

Here I am at the other far end of the building with the entire rocket behind me. 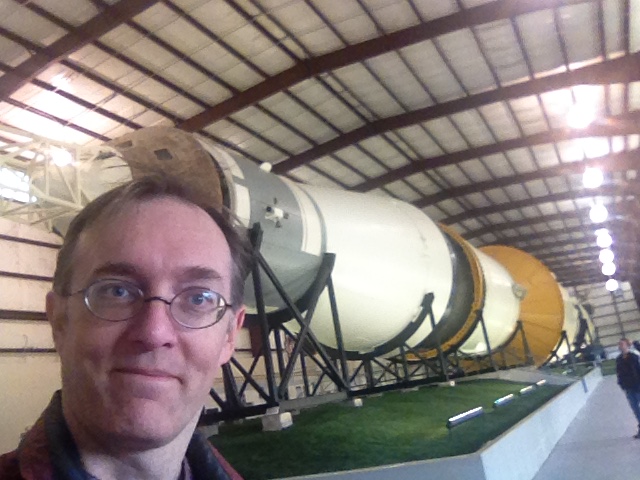 Equally amazing and awesome, there was an actual Apollo capsule at the top of the rocket: 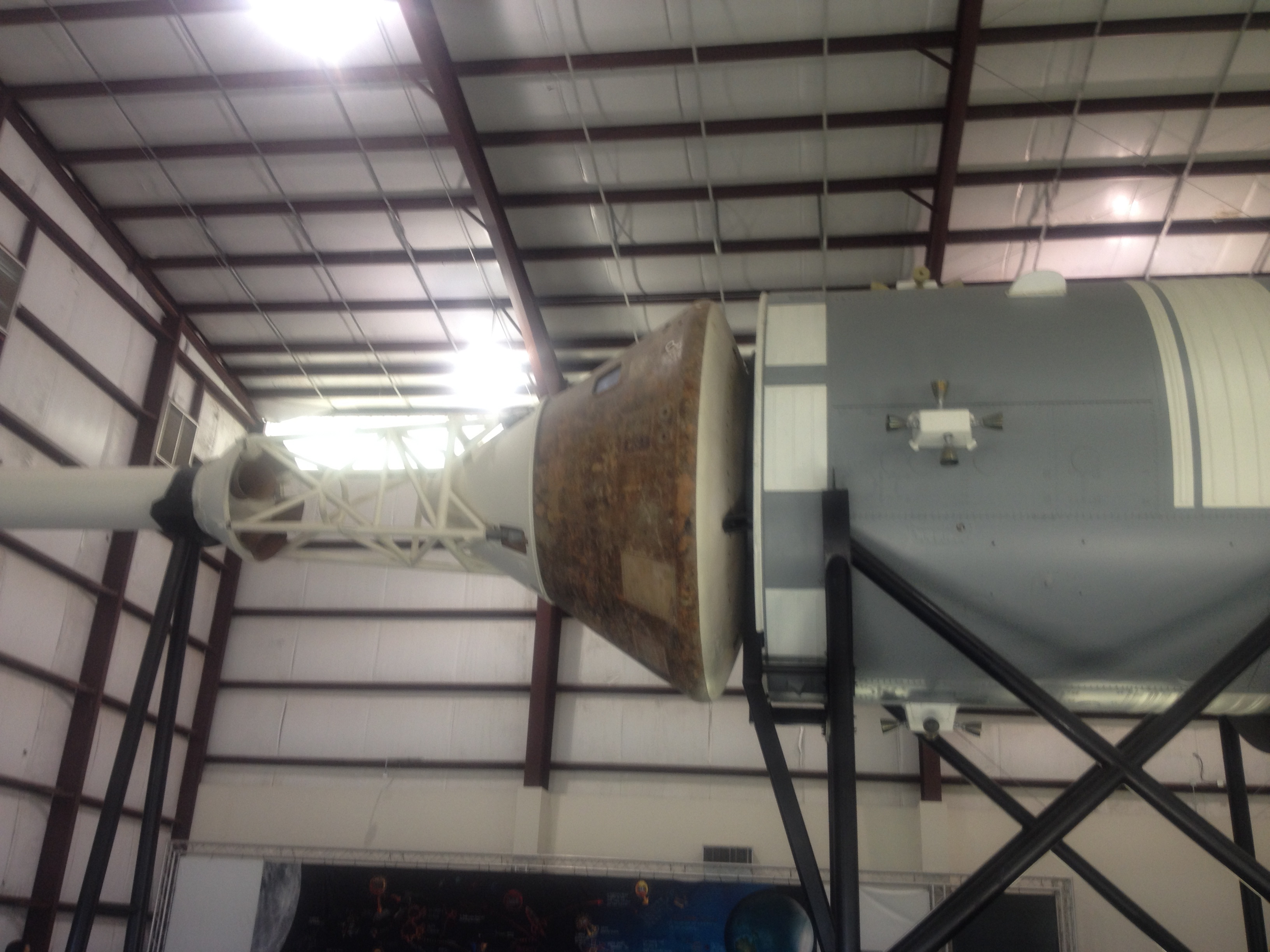 I regret and apologize that I couldn’t determine which one it is.  I still can’t with a web search. (If you happen to know, please write in a comment below!)  I even found an excellent article that talks about this Saturn V restoration and the opening of the building it is housed in, with many more photos here on collectspace.com.  But even there they don’t mention which Apollo capsule that is.  I hope we’ll get an answer in a comment.

There are also some very historic and cool rockets or rocket engines outside the building.  For instance, the type of rocket used for a Mercury space flight.  This was one similar to those used to launch John Glenn and Scott Shepard into orbit. 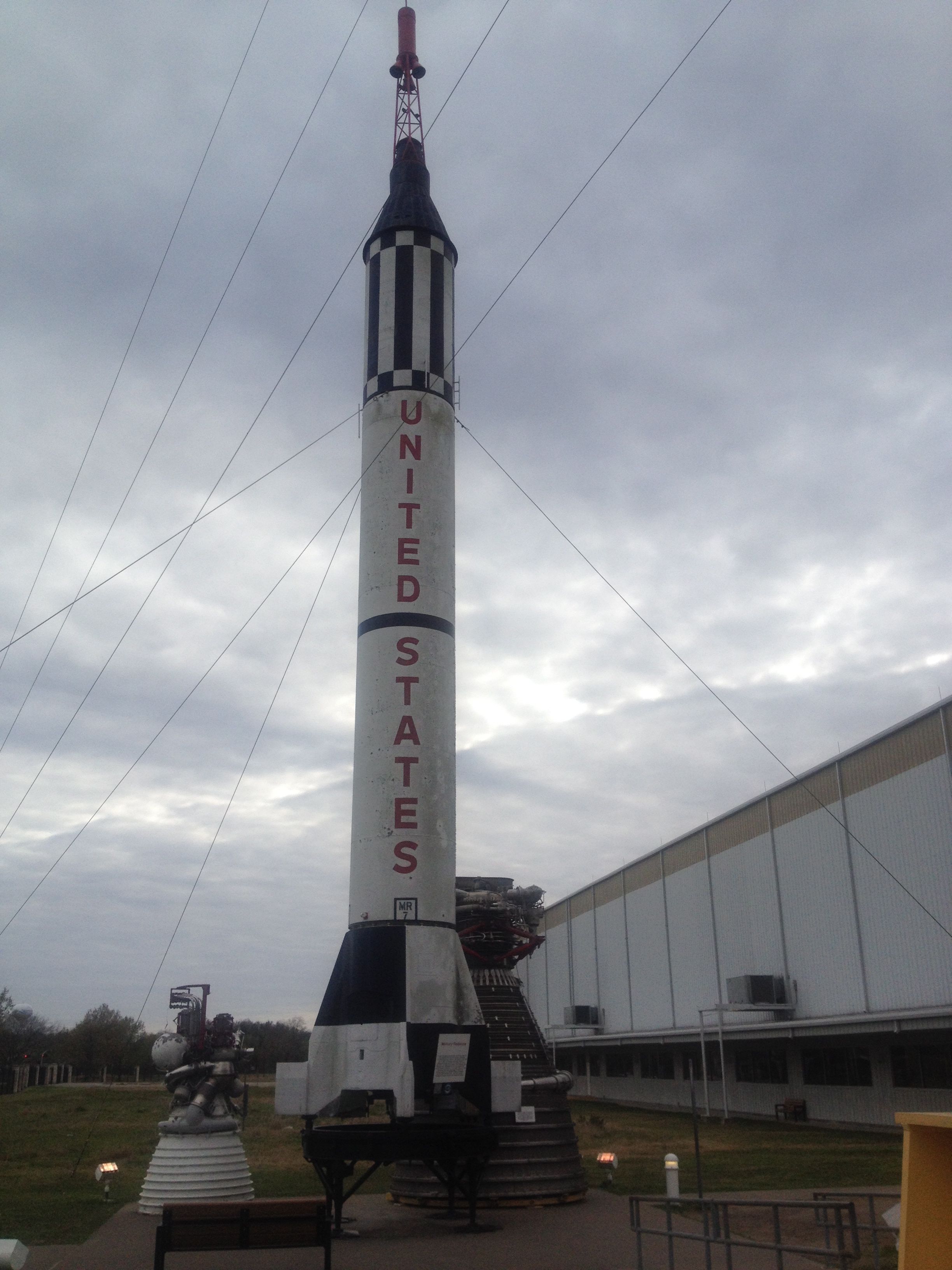 It looked very small for a human to fit in the top and get into orbit!!  But it could be the comparison to the Saturn V which makes it deceptive.

I hope you enjoyed my photos and account of some historic aerospace artifacts and space history at The Space Center at NASA Johnson.  I’ll be grateful to read your thoughts with a comment below.  Thanks for reading, and thanks for your interest in rocket science!  If you are ever in Houston, I highly recommend you visit The Space Center!